Patrick Dacy’s red Converse sneakers creak on an unfinished wood floor as he combs a gallery wall of glistening liquor bottles. He strokes his 70s-style beard and leans against a wooden counter in a small room with vintage wallpaper and a few choice antiques, including rustic barrels. Despite the moonshine-era feel, the background music is not rag time jazz, but heavy metal. This is Duke’s Liquor Box, a newcomer to Greenpoint’s trendy Franklin Street and a boutique spirits shop offering small-batch and hand-crafted labels, many produced right here in Brooklyn.

Owner Dacy delights in discussing the “magical flavors” produced by old world distilling and the use of natural ingredients. He points out some of his stock standouts: a roasted blue-corn whisky called True Blue (from his native state of Texas), Sorel (a hibiscus-infused liqueur from Brooklyn), and Delaware Phoenix Distillery’s Absinthe (made by a woman-run distiller in upstate New York). Also on hand are several types of gin, vodka, bitters, apéritif, Tequila, mescal, and rum—some of which are organic or kosher. 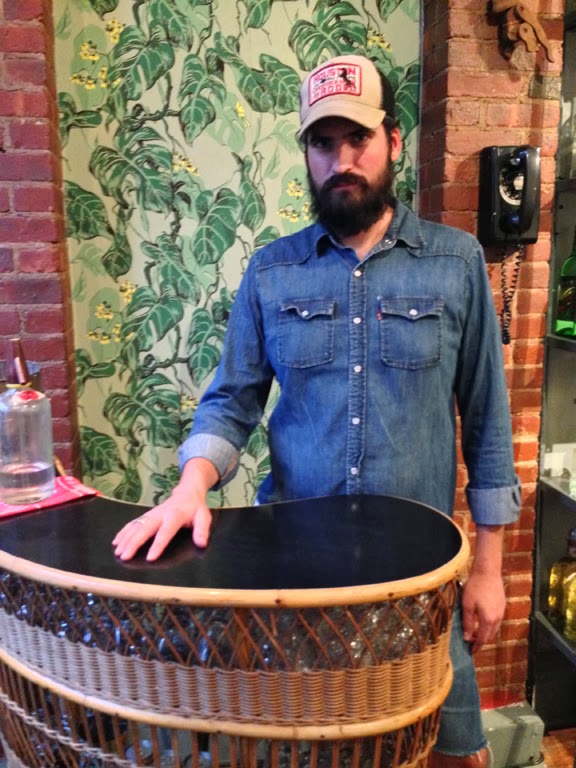 Greenpoint’s crafty power couple, Dacy and wife, Mary Brockman, also run Kill Devil Hill, the “general store” next door where Brockman sells her handmade wares, creates custom retro aprons and offers denim repair. Another of their creations, young son, Duke, is the namesake of Duke’s Liquor Box. The story goes, the store’s startup money came form Duke’s grandmother who intended it as a college fund for Duke, and penned an amusing letter about the terms of the investment, which hangs in a frame at the front of the store. The friendly Liquor Box family are welcoming hosts and are happy to share their stories, and those of their specialty liquors.

A good time to visit Duke’s Liquor Box is during one of their tasting events, when you can pull up a seat at the vintage wicker bar and sample the goods before you buy. Despite having only opened in September, bottles are flying off the shelves, many in the hands of local bartenders and collectors from abroad. This is a great stop for the consummate party host, discerning imbiber, or seeker of a potent Brooklyn souvenir. Prices, written in magic marker under each bottle, range from $20–$110.